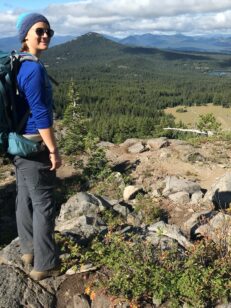 How did you get involved with Greenbelt?

Russa Kittredge, my friend’s mom who was already on the board heard that they were looking for a student board member and sent me the application. I’m so glad she did because it’s been such a valuable experience, and a great opportunity to learn about nonprofits, how environmentalism works in the real world, and to help my community here in the Willamette Valley.

Who are your environmental heroes?

Dr. Robert D. Bullard is the first person who comes to mind. He is often called the father of environmental justice, which is an intersection of environmentalism that I’m very passionate about. His first book,  Dumping in Dixie: Race, Class and Environmental Quality raised awareness on the issue of environmental racism and the growing movement against how environmental hazards like landfills, air pollution, and toxic waste disproportionately affect communities of color in the United States.

Some young leaders of the environmental movement today that inspire me are Isra Hirsi, a 17 year-old woman who advocates for environmental justice for inner-city neighborhoods, especially communities of color (she also happens to be the daughter of Congresswoman Ilhan Omar), and Autumn Peltier, a 16 year-old Canadian Indigenous woman who advocates for clean water and water rights. There’s so many more!

What may older generations not understand about your generation’s concerns about the environment? What generational perspectives are missing in today’s conservation movement?

I think what people misunderstand most often about the environmental movement is where it began. People like John Muir, Gifford Pinchot, and Theodore Roosevelt are often credited with founding environmentalism, specifically conservation, in the United States, but this is not at all true. Indigenous people are the original environmentalists, not only in the U.S. but all over the world.

Muir and Pinchot’s idea of conservation revolved around the settler view of wilderness, which was land that should be untouched by man. This meant that to preserve the land, the Indigenous people that lived there had to be removed. And so our National Parks system was born, and although I value our national parks, I reject the ideals they were built upon and I believe the popular history of environmentalism and conservation needs to be rewritten without the whitewashing. For more information on this topic read “Challenging the White Narrative of Conservation” on Melanin Basecamp.

How do you want to impact Greenbelt Land Trust?

I think Greenbelt is headed in the right direction as far as reconciling with the racist history of conservation, but I’d like to encourage that movement even further. Another hope that I have for Greenbelt is that we can open more of our properties up for public use because although we are maintaining the land so it can foster healthy ecosystems of plants and wildlife, I want people to enjoy the greenspace too! 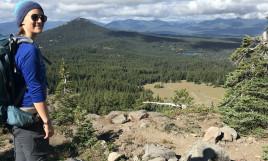