Behind the Images: Q&A with Jonny Armstrong 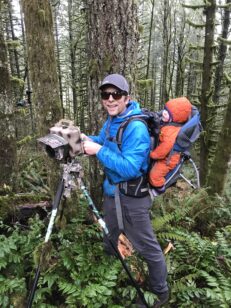 Jonny Armstrong is an Assistant Professor in Fisheries and Wildlife at Oregon State University and a Greenbelt Land Trust volunteer.

You have seen many of Jonny’s amazing wildlife photos and videos in our newsletters and online since 2017, when he moved to Corvallis and began volunteering with us.  We were pleased to recognize Jonny’s many contributions with the 2019 Volunteer of the Year award. We recently asked him a few questions about how he gets these amazing images and why he volunteers for Greenbelt.

Q: When did you first get involved with Greenbelt Land Trust?

In 2017 I met Matt Blakeley-Smith at my daughter’s daycare. I had just moved back to Oregon and I was looking for local spots to camera trap. Matt mentioned the land trust and we both were excited about the possibility of using camera traps to exhibit the wildlife that benefit from Greenbelt’s conservation.

I love Bald Hill Farm because it brings joy to so many folks in our community (as evidenced by the full parking lots) while also supporting a wide variety of wildlife. Elusive species such as bobcat thrive at Bald Hill despite all the human traffic. On a trail camera we set there we captured a bobcat waiting for folks to jog by on the paved path, crossing the path, and then returning a short while later with a rabbit in its mouth. I also love watching the Harrier hawks and Kestrels, looking for newts, and trying to find the humming birds that are often calling along the path. 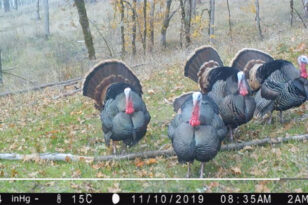 Q: How and when did you start camera trapping?

In 2011 I was doing my PhD research in Bristol Bay, Alaska, where there are lots of brown bears.

At the same time, I was learning how to better use lighting in photography and I started dreaming of taking lit portraits of bears. I was doing a fair amount of fiddling with electronics for my research, so I got the idea to make a motion-triggered camera trap, so that I could set up elaborate environmental portraits without having to be there in-person to take the picture. It turns out there’s lots of online tutorials for hooking up a motion sensor to trigger a camera, but I had to go through a lot of trial-and-error to figure out how to keep everything powered up in the wild. Since then I have camera trapped a diversity of critters, ranging from leopards in Kenya to Douglas squirrels in my backyard. 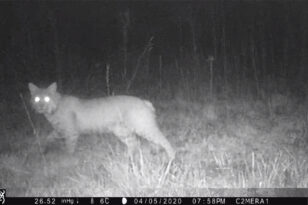 My favorite image remains my first success with Greenbelt. Matt and I set a bunch of trail cameras (which I use to scout areas to determine where to set up a fancier camera trap) in 2017, but we actually did rather poorly, getting a lot of deer and turkey, but few of the carnivores we were after. After moving the trail cameras around, I found a broad shallow spot in a stream, with a game trail leaving on both sides. I knew this would be a good spot and sure enough my trail camera captured video of a plump bobcat.

It took me a while to find time to set up my fancy camera trap, but when I did, the cat came through with a litter of kittens. 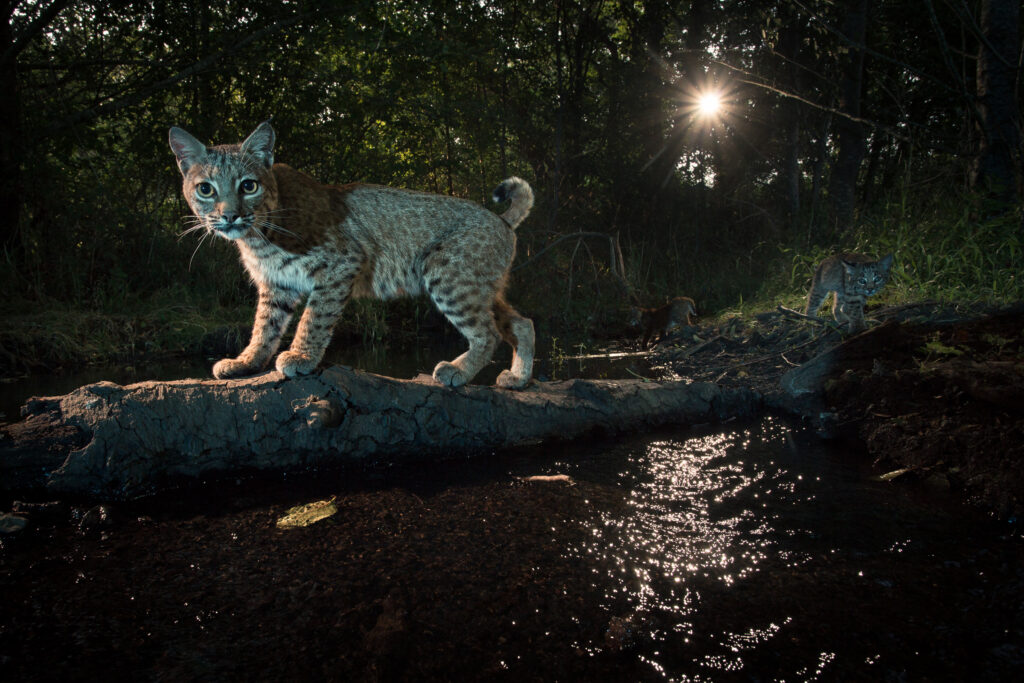 I was thrilled with the image of the bobcat family. The composition was great with the mother crossing the log in the foreground and her kittens along the stream in the background (including one crossing in a different spot). I love how the lighting of this shot looks natural but it’s accomplished by adding artificial light to the scene. That sun is actually a flash that I hid in the background and it’s what makes the glare on the water, so that you can tell this is a creek. I sent a narrow beam of warm light over the bobcat’s shoulder that just brushes the right side of its face and balances with cooler fill light that comes straight-on from behind the camera. I still can’t believe how perfectly this shot worked out, and it really captures everything I love about camera trapping: studying animal behavior, experimenting with light, and having nature surprise you.

Bobcats and mountain lions are unbothered by the cameras. The shutter click briefly piques their curiosity and sometimes they’ll look over as though they are wondering if they heard potential prey. They don’t seem to notice the flash, perhaps because it lasts less than 1/1000th of a second and does not need to be very bright, due to the sensitivity of today’s camera sensors. 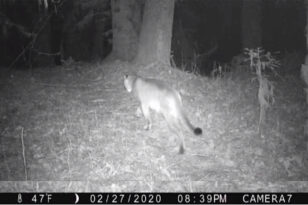 Q: What’s it like bringing your kids with you to check or set up a camera?

In February I wanted to give my wife a break, so I took both kids with me to check a camera trap I’d set for cougar. My 3-y old Hayden was in a terrible mood and I forgot my 1.5-y old Rya’s shoes and socks, so we were a real mess. I zipped Rya into my jacket and we set off, but then Hayden insisted on hitching a ride as well, so I had to hobble a non-trivial distance to my camera with two kids dangling off of me.

My kids cheered up fast once we were outdoors and they had fun playing on the log my camera was aimed at. A few days later a cougar came through and my camera captured her jumping onto the log. That’s pretty much how camera trapping goes for me. I set the camera by myself usually (that’s one thing I can’t do with kids dangling off me), but every time I swap batteries or adjust the camera I have one or both kids with me. It’s a really nice way to spend time with them; they love being in the woods and Hayden loves helping with the batteries.

Q: Why do you support the work of Greenbelt?

The Willamette Valley is a significantly better place to live because of the work of Greenbelt Land Trust and its partners. If you look at the Willamette Valley on Google Earth, the dominant features are industrial timber and agriculture. But living here and being on the ground, it doesn’t feel this way. Greenbelt makes it easy for folks to get lost in nature in their own community. I feel incredibly privileged to be able to drive less than ten minutes to a place where I can track bobcats with my kids or watch them play on a log that I know a mountain lion will step on a few nights from now. 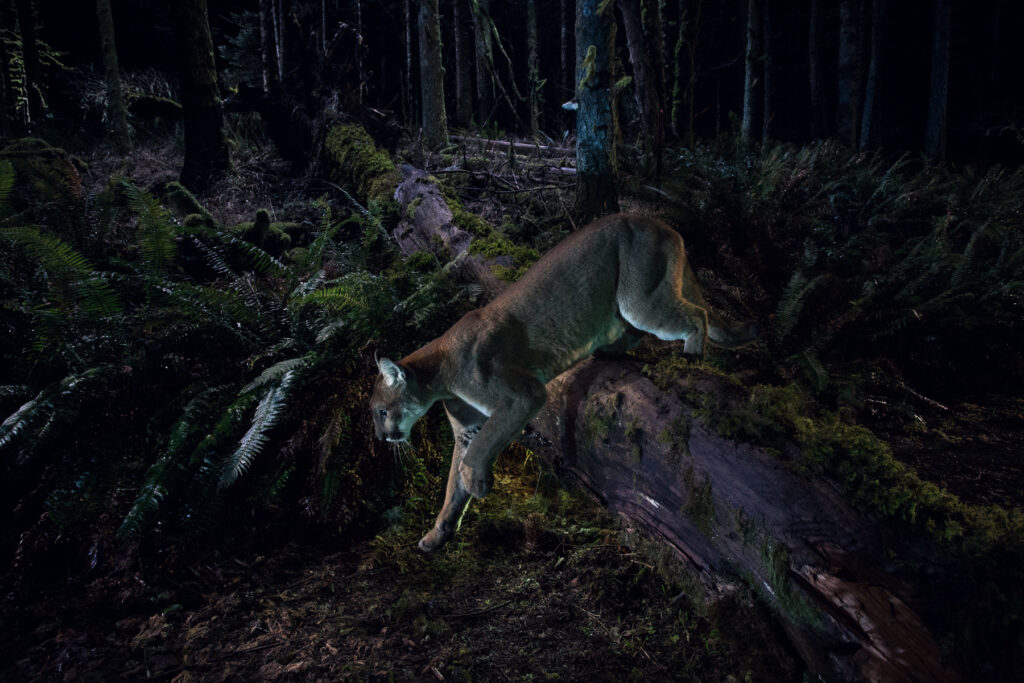 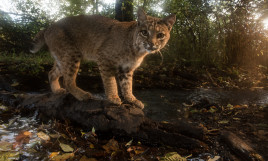