Poised for Flight: Saving Endangered Species in Our Backyard 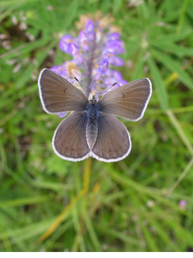 She’s fresh on the scene, all grown up and ready to spread her wings. She’s looking for food, a mate, and shelter for her offspring, in that order. If it’s cold or raining she can’t do anything except hunker down in the grass and wait.

She’ll be dead in three weeks no matter what, and the survival of an entire species hangs on her success.

Time is short for a Fender’s blue butterfly, but this story might have a happy ending.

Twenty-one years after landing on the endangered species list, Fender’s blue is poised to fly towards recovery.

Thanks to a community of conservation supporters and the public and private partnerships working to save this species and the iconic Willamette Valley habitat it calls home, Fender’s blue will move from endangered to threatened status in 2022, an amazing success story for a butterfly that was thought to be extinct in 1937.

Golden paintbrush, Oregon vesper sparrow, Bradshaw’s biscuit root, Willamette daisy, Fender’s blue butterfly, and the list goes on. Why are there so many rare and endangered species in the Willamette Valley?

It’s simple: over 99% of the native habitat in the valley has been converted to other uses, leaving these species on the brink of extinction.

Making an endangered species is easy. Saving them is hard. But Fender’s blue isn’t the only recent proof that we can 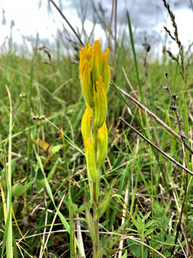 save them when we bring the collective will and support of our community together.

Golden paintbrush is a delicate, glowing spot of light on Pacific Northwest prairies. Down to 10 populations in 1997, and completely extirpated in Oregon, recent restoration efforts have resulted in the plant’s recovery and allowed the US Fish and Wildlife Service to propose to remove it from the endangered species list.

Both Golden paintbrush and Fender’s blue butterfly are protected at Greenbelt’s Lupine Meadows property in Philomath. With your support, we are protecting the places that hold the fate of multiple species and working with our conservation partners to restore habitat so that more conservation success stories are on the horizon.

Saving species starts with protecting land. Our conservation staff are experts in finding the most important places to protect in the mid-Willamette Valley.

Bradshaw’s desert parsley, a “biscuit-root” found only in wet prairies in the Willamette Valley, was listed as endangered in 1988, down to 11 populations and 30,000 plants. In 2017 Greenbelt purchased Courtney Creek, a property outside of Brownsville with a large Bradshaw’s desert parsley population, ensuring it’s permanent protection. Protecting and restoring places like Courtney Creek has allowed the species to thrive. Now numbering 11 million plants in 24 populations, the plant was taken off the endangered species list in March. 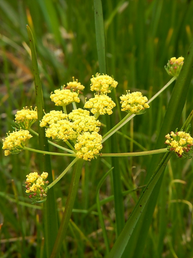 These victories in the valley can only happen because of conservation efforts on private land, where the majority of our disappearing species are found. The wildlife refuge system and other public lands are vital, but not big enough to ensure their survival.

For the biscuit root, private land protection was key to recovery. “In the case of Bradshaw’s desert parsley, it is specifically Greenbelt properties east of the Willamette River that got this species over the finish line and off the endangered species list,” says USFWS biologist and Greenbelt member Jarod Jebousek, “Public-private partnerships are crucial to the recovery of these species, and it is hugely important that Greenbelt is protecting these places in the Willamette Valley.” 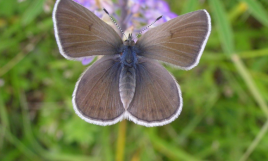