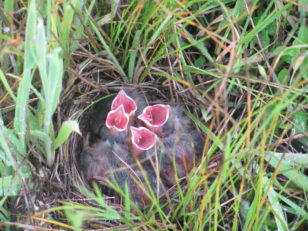 This sweet and unassuming bird delights in dust baths; makes a home in open spaces like meadows, prairies and even along roadsides; and makes friends of farmers by eating insects and weeds that otherwise damage crops [American Bird Conservancy]. But, it is this grass-dwelling bird’s song that delights the hearts and ears of naturalists and ramblers alike.

“The Vesper Sparrow’s sweet song, a combination of clear whistles and trills, can often be heard at twilight — roughly the same time as Catholic vespers services, which earned the bird its name” [American Bird Conservancy].

With less than 1% of native prairie remaining in the Northwest due to human impacts like prairie conversions to large-scale agriculture and development, the Vesper Sparrow population is declining rapidly. This increasingly rare bird serves as a critical link in ensuring the diversity necessary for ecosystem health — a delicate ecosystem that all life depends on.

“With so few birds remaining, many in small and isolated populations, the Oregon Vesper Sparrow needs the immediate protection and conservation focus made possible through [Endangered Species Act] listing… Every year, more populations are being lost, and we are not seeing the establishment of new populations where habitat restoration has occurred” [Altman, Bob (2017, Oct 6). Vesper Sparrow. Retrieved from https://abcbirds.org/bird/vesper-sparrow]. 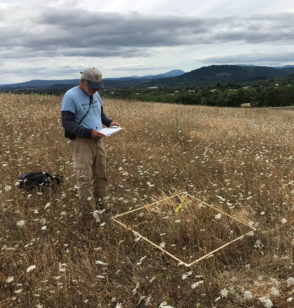 Since 2017, Altman has been looking at a variety of factors for Greenbelt, including the survival and return rates of adults wintering in California; the number of eggs laid and the number that hatch; survival from hatching to fledgling; and the number of those that fledge, winter in California, and return to Oregon the following year. This critical study helps tease apart important factors in the declining population of the Vesper Sparrow.

Greenbelt’s work in protecting and restoring the land is strategic and intentional. We develop our conservation priorities around building a connected, resilient landscape that supports native species with a focus on increasingly vulnerable species, like the Vesper Sparrow.

For this little brown and white bird and her delightful song — Greenbelt’s stewardship team gives focused attention to the characteristics of existing nesting sites and habitat preferences in order to regenerate the land and provide a more resilient habitat for the Vesper Sparrow to flourish.