When I say I want to hike the Pacific Crest Trail, people ask What?,  How?, and Why?

I first heard about the PCT back in the thirties, when I was a child.  Back then it was called the Skyline Trail, and it was a route cobbled together by the Forest Service from existing trails to go along the crest of the Cascades from Crater Lake to the Columbia. It sounded like a grand adventure. Gradually the  track was extended through southern Oregon, and then Washington, and, after much work, planning, revising, lobbying, name changing etc., it became the Pacific Crest National Scenic Trail, the PCT, a path leading 2650 miles from Mexico to Canada.

I have hiked in the Cascades all my life, back-and- forth, across, and along the PCT, but for years I never put the bits together.  Then, ten years ago, when I turned 70, I thought “It’s now or maybe never.”  So, over a period of 4 years I walked from California to Canada:  a summer in Oregon and a summer in Washington–and then I did most of it again.  I’m 80 now, and I’ve decided to do it again. I’ll start with the Oregon section, beginning South of Mount Ashland and ending 465 miles later at The Bridge of the Gods—or at the ice cream shop nearby.  Can I do it?  Will I? Who knows?

How? On foot, backpacking, camping all the way.  In Oregon there are only 2 lodges on the trail: Crater Lake and Timberline.  While each offer welcome amenities, getting reservations a year in advance of an unknown arrival date is impossible.  But, oh, the food. 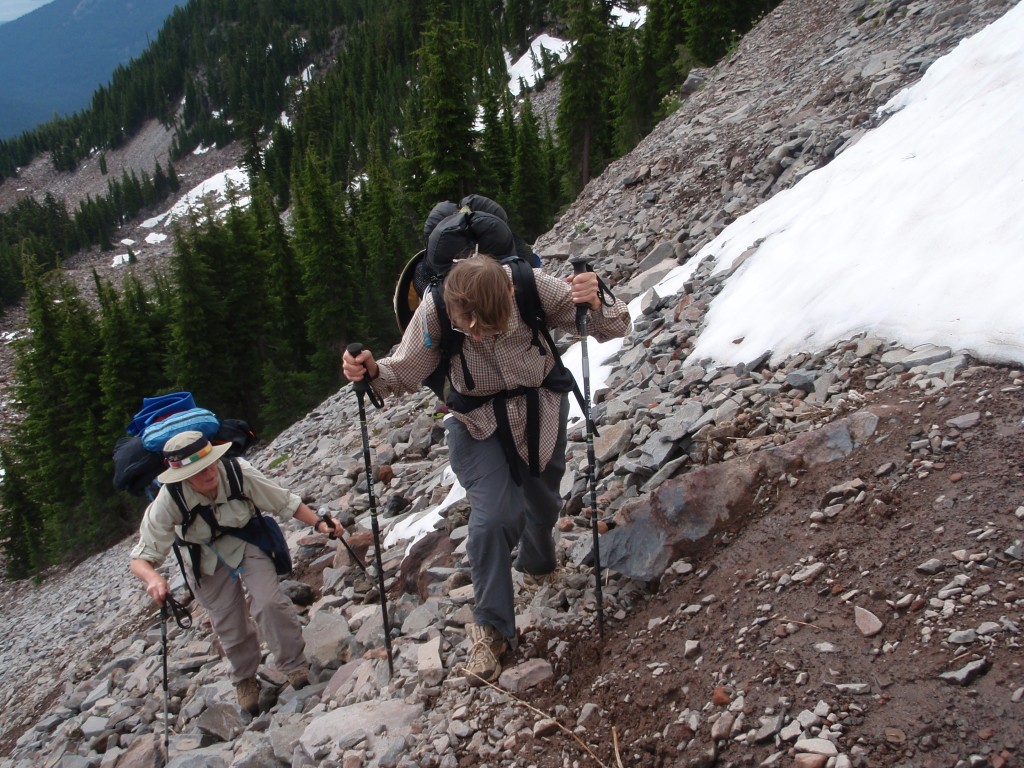 Alsie maneuvering along a mountain-side.

The young folks that go the entire length in one year travel 20-30 miles a day.  I can count on maybe 10 miles.  I carry all my own equipment, food, etc.  Since I can carry only about 30 pounds, I depend on resupply.   There are two post offices along the trail– one at each lodge, 277 miles apart–so I rely heavily on friends for food boxes when we cross highways. We carry minimal camp and personal gear.  It consists of repair/survival kit, first aid kit, light weight tent or tarp, sleeping bag and pad, stove and fuel, pot, cup, and spoon, rain gear, warm clothes, personal choice of footwear, socks, hat, socks, clothing, and socks.  For me, I am old and skinny so require more ‘what if’ stuff than a 20-year old.  This basic gear comes to 17 – 18 pounds, not including food and water.  The trail follows the high ridges where water is scarce; there is one dry stretch of 26 miles.  Water adds a significant but variable weight.   Food and other amenities fill out the pack.

Like most long distance hikers, I try to leave nothing behind but foot prints and sweat.  I don’t use campfires so I leave no ashes.  Anything I carry in I carry out.  And as a rule, I avoid electronics.  GPS makes your brain lazy, cell phones only operate if there is a tower in sight and I don’t have time to learn how it all works anyway.  The only extra I’m taking along on this trip is some rare common-sense … in the form of my daughter-in-law.  She will carry a satellite signal device that will shriek louder than we can if there is a true emergency.  For some reason people worry about me. 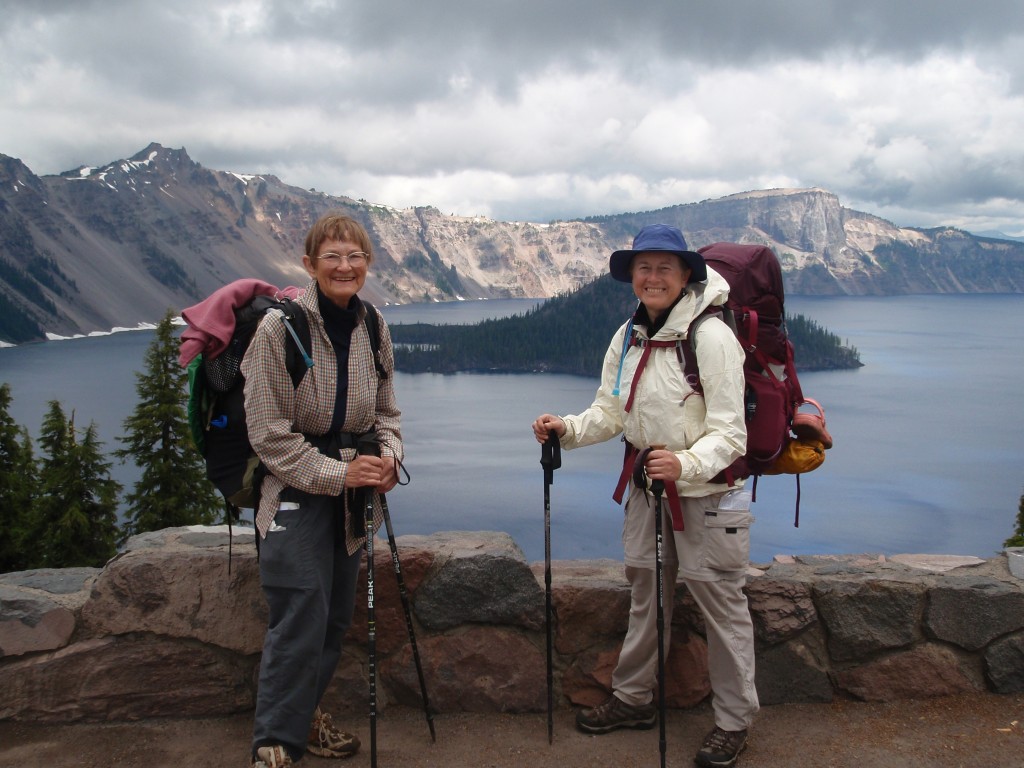 Alsie and Mary pause at an overlook at Crater Lake.

Many people understand the What and the How, but not the Why.  Somehow, I’ve never been able to come up with an adequate answer.  The question has always baffled me, and I’ve finally figured out why.  It’s the wrong question.  The question for me has always been: “Why wouldn’t I hike?”  Nothing feels more natural to me than to be out in nature.  So why wouldn’t I hike?  Why wouldn’t I want to see that stars at night?  …hear Mountain Chickadees before dawn?  …smell the mountain Hemlock ?    …hear a Pika calling from its rockslide hideout or catch an unexpected glimpse of a Fisher?  …see a magnificent view every day?  …eat food that tastes ten-times better at the end of a tough climb and then sleep ten-times better for the effort.  So, why wouldn’t I hike?  Why would I ever stop?

I know I’m not the only one who feels this way.  Unfortunately, though, we all have obligations, so we circumscribe our dreams of Himalayan adventure, just a little, and hike closer to home, for just as long as we can.  California to the Columbia is a good walk, and that ice cream shop is an arbitrary, but convenient, point to stop—for just a while—until I can take care of the rest of life.  I’ll do that while it’s cold and rainy.   But I can’t stay cooped up all the time, so I’ll find my way out for a walk whenever I can.  And, fortunately, I live in Corvallis, where we have some nearby open spaces where I can hear the Winter Wrens in the understory, see beautiful views, catch a glimpse of a weasel, find a Phantom Orchid beside the trail, eat a snack that tastes ten-times better at the end of a tough climb, and then sleep ten-times better for all the effort.

The work of the Greenbelt Land Trust has brought wilderness within reach of all of us—without having to take a leave from our “real” lives.  There are trails within 3 or 4 miles of everyone in Corvallis.  It takes a lot of work and money to bring the “out there” within reach of all, but I am thankful for it.  We are so lucky.  Many thanks to the Greenbelt Land Trust.

Essay by: Alsie Campbell, 2012
In 2012 Alsie and her daughter-in-law, Mary, hiked the length of Oregon on the Pacific Crest Trail, utilizing their efforts as a fundraiser for Greenbelt Land Trust. Oh, and did we mention that Alsie was 80 years young at the time?! Here’s to people like Alsie Campbell – we honor your tenacity, adventurous spirit, and appreciation of nature! Read an article about their walk HERE. 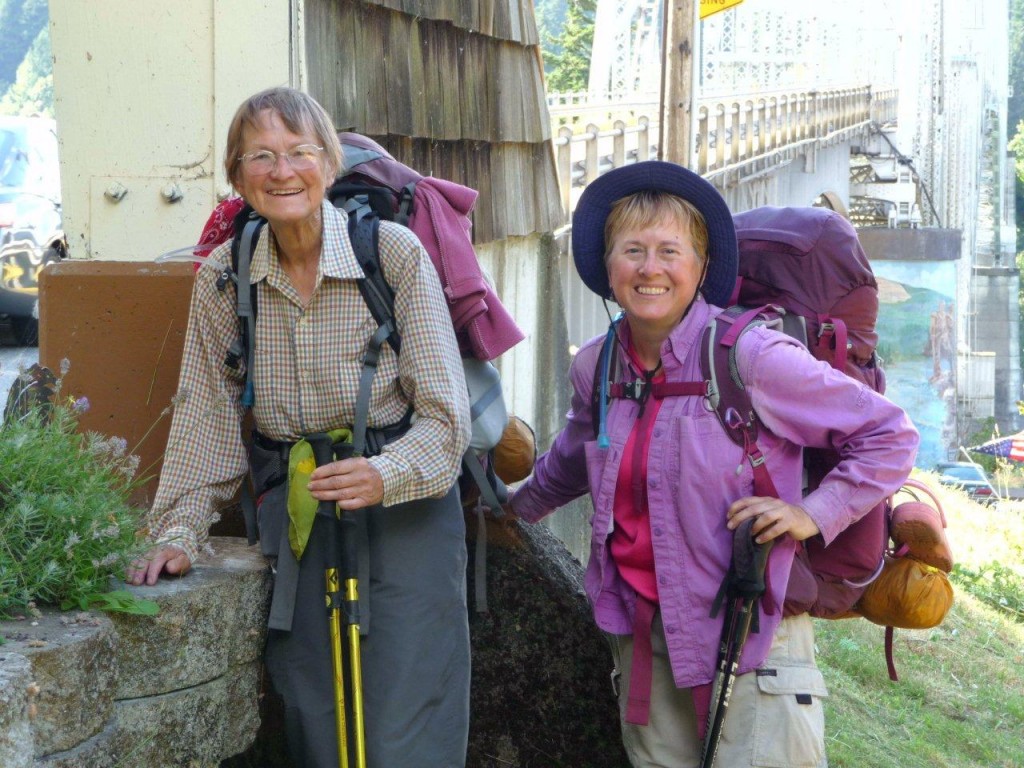 Alsie and Mary at Bridge of the Gods at the end of their walk across Oregon. 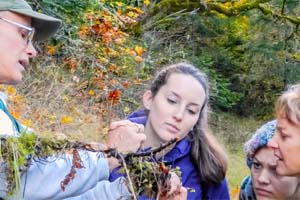 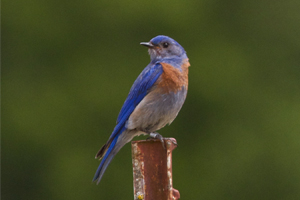 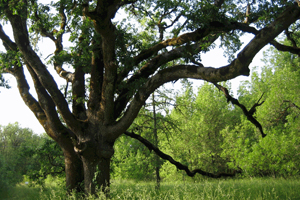 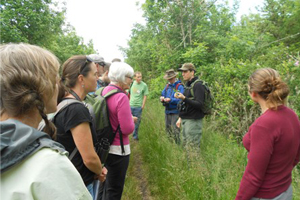 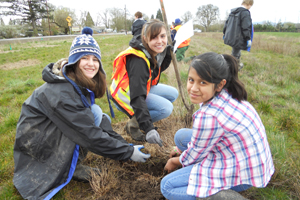 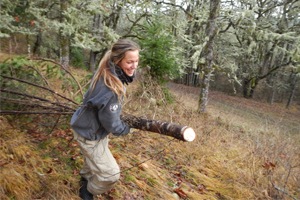 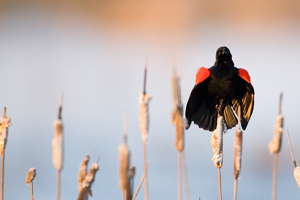 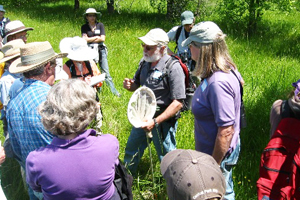 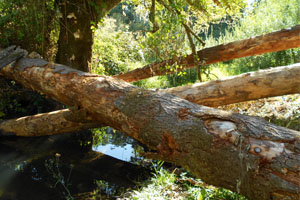 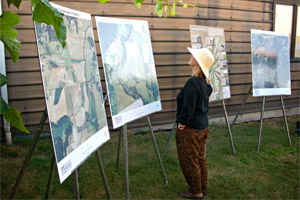 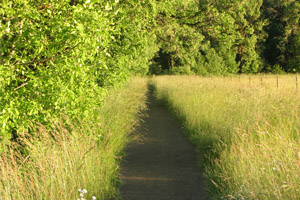 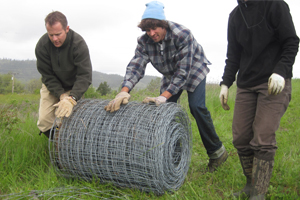 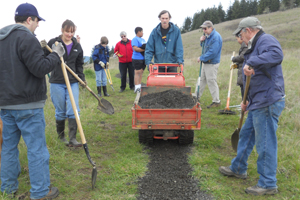